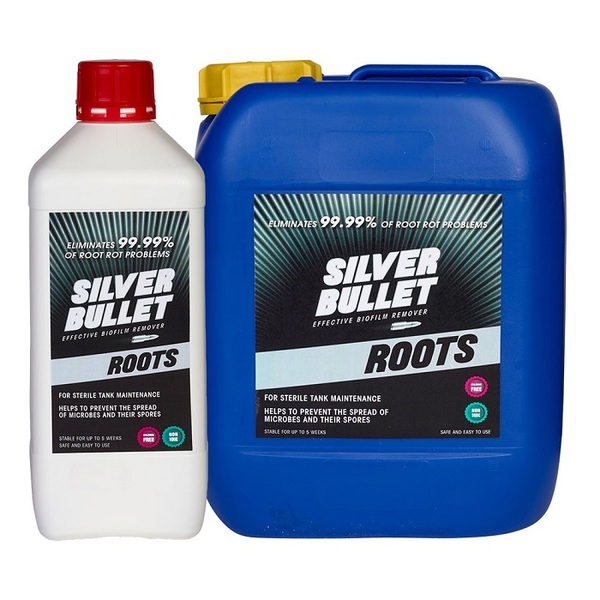 Silver Bullet Roots is an active Hydroponic system disinfectant like no other. Silver Bullet Roots helps suppress and prevent Pythium but is also highly effective against bactericide, virucide, sporicide, fungicide, algaecide and amoebicide. It delivers unparalleled stability in tanks for up to 5 weeks and contributes to healthy white roots. It is non-toxic and non-corrosive, chlorine free, pH-neutral, easy to use. It is also odour, colour and taste free. It does not enter the plant at all!

Although highly stable, over time, there is a slight natural decomposition of the silver stabilised hydrogen peroxide, coupled with the sterilisation reaction leads to the release of dissolved oxygen into the nutrient solution. This increase in dissolved oxygen produces an increase in nutrient uptake, stimulating growth rates further.

*NOT TO BE USED IN CONJUNCTION WITH ORGANIC FEEDS OR ENHANCERS*

PREVENTATIVE:
Silver-peroxide helps to prevent problems before fungi and bacteria get a chance to cause disease.

EFFECTIVE:
Suppresses and prevents fungi such as Pythium, but is also highly effective as a general fungicide, bactericide, virucide, sporicide, fungicide, algaecide and amoebicide.

STABILITY:
Unparalleled stability in tanks for up to 5 weeks, unlike traditional hydrogen peroxide.

HARMLESS:
Non-toxic, noncorrosive, chlorine free, pH-neutral, and it does not enter the plant at all.