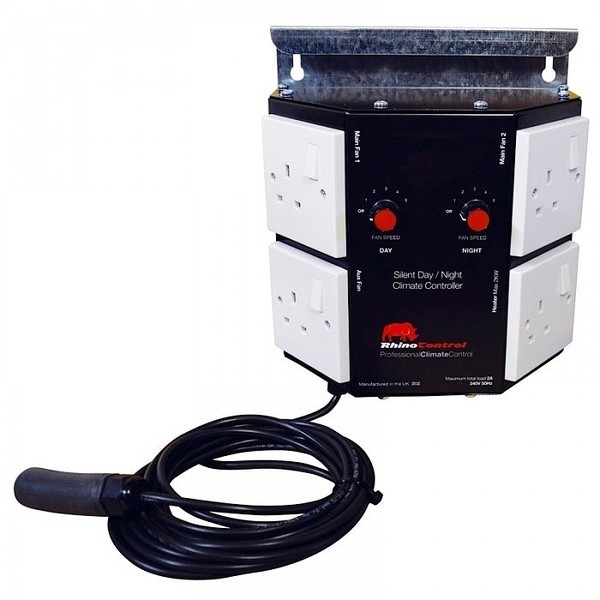 The Rhino Silent Day & Night Climate Controller works in two ways, firstly it silently controls up to two fans, so it can be used with both intake and ex...More

The Rhino Silent Day & Night Climate Controller works in two ways, firstly it silently controls up to two fans, so it can be used with both intake and extraction, but also allows both fans to be run at different speeds during lights on and lights off periods.

The speed of the fans are independently set for day (lights on) and night (lights off) using 2 simple dials, with 5 speed settings, on the front of the unit as when lights are on, a greater volume of air will need to be exchanged than during lights off.

In addition, the Rhino Day & Night Climate Controller can also run an oscillating fan during lights on, then during lights off, it can independently switch on a heater to help maintain night time temperatures, which is especially useful during autumn and winter months, and all this can be controlled from just one unit, rather than using multiple timers.

The unit itself was designed and manufactured in the UK and is constructed from robust, heavy duty, steel casing and built to the same high standard Rhino Carbon Filters have been renowned for, it also features hanging lugs, allowing it to be fixed to a wall.

Manually adjustable through five different voltage levels corresponding to fan speeds, the advantage of the voltage stepper over variable resistors is the lack of hum created by the resistance.

Key features of the Rhino Silent Day/Night Climate Controller include: