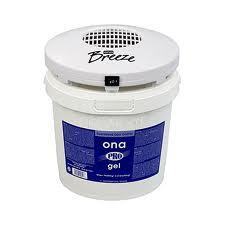 Ona Gel Pro is non-perfumed unlike Fresh Linen, but still has the same grow room odour control and eliminating properties as the rest of the Ona range. Ona Pro deals with your odour problems without trace!

Ona Gel Pro is an odour neutralising agent which is a formulation of 32 essential oils chosen for their ability to neutralise a wide range of odours both organic and non organic. Ona products do not mask odours with a stronger smell, they neutralize by absorbing the offending odour molecule.

The ONA Breeze Fan fits straight onto the top of an ONA 4 litre gel tub or 4 litre liquid refill bottle and distributes the ONA odour neutralising vapour around a medium to large area of up to apprx 100 metre square. The Breeze fan has two fan speeds and an OFF position. The first speed is almost silent and will gently emit ONA odour control into the room space in which it is placed. The second speed setting can be used for odour control when the room size is large (up to 100mtr2) or for a short burst of extra odour control when it is required!