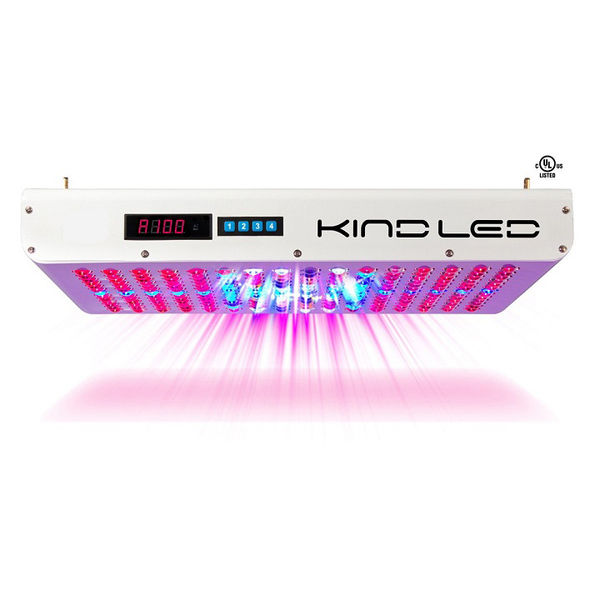 Although on the exterior, the K3 and K5 series look similar, the difference between the two are quite staggering. Firstly, the actual LED’s are an opti...More

Although on the exterior, the K3 and K5 series look similar, the difference between the two are quite staggering. Firstly, the actual LED’s are an optimal mix of 3 and 5 watt, which produces the perfect amount of usable light, intensity and canopy penetration. Too many 5 watt LED’s and the unit will run too hot, which goes against the grain of why growers choose LED lighting in the first place. With a mix of 3 and 5 watt, the light still runs cooler than its HID counterpart, and with the added intensity of the 5 watt diodes will help push the plant's yields above and beyond expectation.

As with the K3, the K5 also utilises a 12 band light spectrum (both visible and invisible to the human eye), but the K5 has Digital Tuning. This means that you have complete control over what spectrum of light is emitted, which is particularly important as depending on what cycle the plants are on, whether propagation, vegetative growth or flowering, the K5 LED grow lamp can be tweaked to suit.

By using the K5 series, there’s also no need for additional timers or lighting contactors as the on/off light schedules can be programmed directly into the unit. In addition, one of the most interesting aspects of the K5 Series is the addition of the Mother Earth functionality. This was incorporated to mimic sunrise and sunset by slowly waking the plants up in the morning by gradually increasing the light, then slowly dimming the lights for sunset. This means the peak intensity of the light will be reached for the perfect amount of time, rather than it being instant as soon as the light is turned on, which then stays constant until the light is switched off.

Kind also introduced a Remote Control into the K5 LED Series. Although it may sound like a gimmick, its a welcome addition as you can control every aspect of the light, from when it switches on/off, the Mother Earth functions and the ability to change the spectrum of light emitted, without needing to balance over a delicate plant canopy which could quite easily end in disaster is you slip or fall. With the remote control however, all the functions can be tweaked, meaning you don’t have to perform any death-defying acrobatics just to change any of the settings, it's simply done with a few clicks on the handheld device, keeping you and your plants safe.

Similar the K3 Series, the K5 units are also fitted with Kind’s revolutionary secondary optical lens which magnifies the PAR levels of the LED’s, making the light intensity greater with increased canopy penetration, allowing the light to reach further down the plant and also the 2cm aluminium heat sinks and quiet running fans to dissipate heat.

With all this extra functionality available in the Kind K5 Series LED grow lamp, all the advantages of using an LED grow lamp hasn’t been lost; the technology has just improved giving healthier plants and greater yields. In addition, the running temperatures are still cooler and with using a fraction of the electricity consumption, they are also cheaper to run than the equivalent HID lamp.